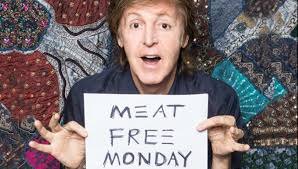 A decade after its inception, the ‘Meat Free Monday’ movement led by the illustrious British musician Paul McCartney and his daughters, Mary and Stella, is more active than ever. It is a global action that, seeking the involvement of consumers from all corners of the world, aims to help curb the environmental impact generated by our eating habits.

Although at first the combination of words ‘Meat Free Monday’ may seem like another recommendation for a healthy diet that we should all consider, the McCartney initiative is a non-profit campaign that aims to raise awareness of the environmental impact of livestock and industrial fishing. The campaign encourages people to help curb climate change, conserve natural resources and, of course, also improve their health by avoiding the consumption of animal products at least one day a week.

The idea of dispensing with meat on Mondays, which is going viral by the ‘Meat Free Monday’ movement, has some precedents. One of them is the “Meatless Monday” that emerged in 2003 in a school of public health in the United States, where every Monday they offered menus free of animal products in the cafeteria as a way to boost the benefits of eating fruits and vegetables. The Belgian town of Ghent joined the movement in 2009, becoming the first city outside the United States to do so. It was that same year when Paul McCartney began to get involved and implement several actions in line with this idea, such as the short documentary One Day a Week, which explains the benefits of avoiding food from animals one day a week and whose premiere, in November 2017, coincided with the celebration of the United Nations Climate Change Conference in Bonn, Germany. And later, the song invites to “think how the world will be in the future” with which the ex-Beatle put the soundtrack to his ‘Meat Free Monday’.

The main pillars on which rests this massive social movement supported by other celebrities like actress Emma Stone and actor Woody Harrelson are as follows:

Reduce emissions from livestock: The United Nations Intergovernmental Panel on Climate Change (IPCC) agrees that it is necessary to reduce the number of greenhouse gases in the atmosphere by 80% by 2050 to avoid catastrophic climate change. In this regard, the Meat Free Monday movement aims to reduce the impact of one of the agents that contribute most to these GHGs: industrial livestock.

Health: From ‘Meat Free Monday’ remember us that the mains health organizations in the world recommend reducing meat consumption. A study from the University of Oxford pointed out in 2010 that eating meat no more than three times a week could prevent 31,000 deaths from heart disease, 9,000 deaths from cancer, and 5,000 deaths from stroke in the UK alone, as well as saving the National Health Service 1.2 billion pounds each year.

Animal welfare: Billions of animals are raised and slaughtered for meat every year. Most of them are raised in intensive, overcrowded factory farms. Intensively raised animals often become sick, injured, and die due to the unnatural conditions they are kept. Farm animals are subjected to mutilations such as beak trimming, tooth extraction, and tail docking to prevent them from pecking and injuring each other. Helping to prevent animal cruelty and suffering is a priority.

Relieving world hunger: It can take up to 12 kilograms of grain to produce just one kilogram of beef. It means that anyone who consumes large amounts of meat may be consuming a disproportionate dose of the world’s available nutrients. Meat Free Monday reminds us that, at present, some 800 million people on the planet suffer from hunger or malnutrition.  But an amount of grain that could feed three times this number of people goes to feed livestock, pigs, and chickens.

Seeking a balance between the current systems of food production and alternative proteins such as cultured meat is one of the maxims of work in Ethicameat. That is why we believe that our ‘Meat for all’ is not too far from initiatives like the McCartney family. The challenges are the same: animal welfare, reduction of environmental impact, better use of natural resources that can contribute to reducing global nutrition problems, and improving food security.