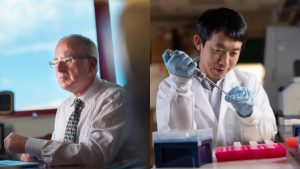 Scientists at St. Jude Children’s Research Hospital and other colleagues say they have shown how a protein responsible for adapting to low oxygen conditions (hypoxia), causes increased expression of fetal hemoglobin (HbF) in adults. The finding has implications for treating sickle cell disease and beta-thalassemia, according to the scientists who published their study “Activation of γ-globin expression by hypoxia-inducible factor 1α” in Nature.

“Around birth, globin expression in human red blood cells (RBCs) shifts from γ-globin to β-globin, which results in fetal haemoglobin (HbF, α2γ2) being gradually replaced by adult haemoglobin (HbA, α2β2). This process has motivated the development of innovative approaches to treat sickle cell disease and β-thalassaemia by increasing HbF levels in postnatal RBCs,” write the investigators.

“Mechanistically, HIF1α–HIF1β heterodimers bound cognate DNA elements in BGLT3, a long noncoding RNA gene located 2.7 kb downstream of the tandem γ-globin genes HBG1 and HBG2. This was followed by the recruitment of transcriptional activators, chromatin opening and increased long-range interactions between the γ-globin genes and their upstream enhancer. Similar induction of HbF occurred with hypoxia or with inhibition of prolyl hydroxylase domain enzymes that target HIF1α for ubiquitination by the VHL E3 ubiquitin ligase.

Hemoglobin is like a protein sponge that soaks up oxygen and allows red blood cells to ferry it throughout the body. Adult hemoglobin contains four protein subunits–two beta-globin and two alpha-globin. Mutations in beta-globin cause sickle cell disease and beta-thalassemia.

But humans have another hemoglobin subunit gene (gamma-globin), which is expressed instead of beta-globin during fetal development. Gamma-globin combines with alpha-globin to form HbF. Normally around birth, gamma-globin expression is turned off and beta-globin is turned on, resulting in a switch from HbF to adult hemoglobin.

“We have known for many years that persistent HbF expression after birth can alleviate the symptoms of sickle cell disease and beta-thalassemia,” said corresponding author Mitchell J. Weiss, MD, PhD, hematology department chair at St. Jude’s. “And very high HbF levels can cure these diseases, despite the defective beta-globin genes being present. Therefore, many laboratories are focused on understanding the perinatal switch from gamma- to beta-globin gene expression and figuring out new ways to reverse it with drugs or genetic therapies.”

The St. Jude group discovered that hypoxia inducible factor 1 (HIF1) directly promotes transcription of the gamma-globin gene to enhance HbF production. HIF1 is an important component of cells’ ability to sense and adapt to hypoxic conditions. In low oxygen conditions, HIF1 accumulates in many tissues and activates hundreds of genes, including HbF in red blood cells.

First author Ruopeng Feng, PhD, a scientist in the Weiss lab, showed that a drug that activates part of the cellular hypoxia response inhibits sickling of red blood cells derived from adults with sickle cell disease. The drug, a proline hydroxylase inhibitor, caused HIF1 to accumulate, bind a DNA regulatory region near the gamma globin gene, activating its transcription to produce HbF and inhibit cell “sickling.”

Proline hydroxylase inhibitors are currently in late-stage clinical development for the treatment of anemia associated with chronic kidney disease. These drugs work by stabilizing HIF proteins to stimulate the production of erythropoietin, a hormone that drives red blood cell production.

“Our findings indicate that proline hydroxylase inhibitors might be useful for treatment of sickle cell disease or beta-thalassemia, where turning on HbF production has therapeutic benefits,” Weiss said. “Approximately 20% of adult sickle cell disease patients develop kidney failure with related anemia. Proline hydroxylase inhibitors might serve a dual purpose in these individuals, by stimulating the production of both erythropoietin and HbF.”

The Nobel Prize in Physiology or Medicine was awarded to the discovery of the HIF pathway in 2019. The current study, led by Weiss’ group, establishes a direct connection between this hypoxia adaptation and HbF expression. This connection explains longstanding clinical observations that HbF is induced during accelerated production of red blood cells after exposure to hypoxia or in some forms of anemia, conditions termed “stress erythropoiesis.”

“Identification of gamma-globin as a HIF target gene supports the notion that HbF evolved as a protective mechanism against hypoxia,” pointed out Weiss. “Studies of hemoglobin over more than 50 years have established many general principles in biology and medicine. It is exciting and gratifying that investigations into hemoglobin and globin gene expression continue to produce new, clinically relevant discoveries.”