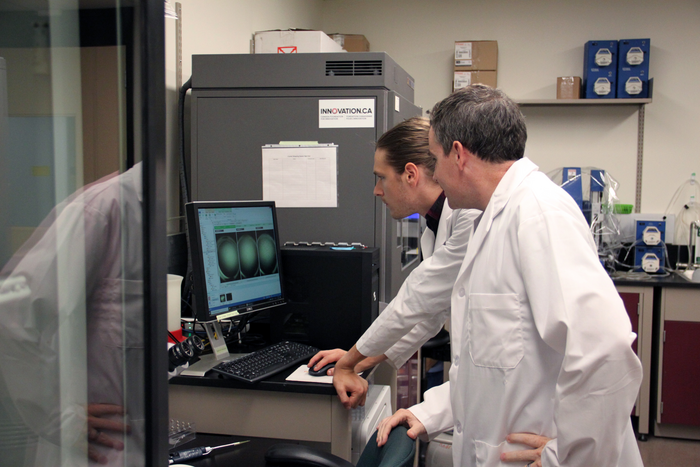 Competition and antagonism are as much a part of microbial life as ours. The evolution of secretory systems that enable some bacteria to bombard their neighbors with toxins holds an obvious advantage in the bacterial struggle for survival.

Scientists at McMaster University, Harvard School of Public Health, Imperial College London, and the University of Manitoba have discovered a new mechanism of bacterial antagonism, including a previously undescribed function for a class of enzymes called ARTs (ADP-ribosyltransferases) that modify RNA and were one of the first bacterial virulence factors identified.

Importantly, the study has identified a novel bacteria-killing toxin that could lead to the development of a new class of antibiotics that could help combat the growing resistance of pathogens against existing antimicrobials. The investigators reported their findings in the journal Molecular Cell (“An ADP-ribosyltransferase toxin kills bacterial cells by modifying structured non-coding RNAs“).

Led by John Whitney, PhD, an associate professor at the department of biochemistry and biomedical sciences, at the Michael G. DeGroote Institute for Infectious Disease Research at McMaster University, the study showed Pseudomonas aeruginosa—a bacterial pathogen that causes hospital-acquired infections such as pneumonia—secretes a toxin that has evolved to kill other species of bacteria by modifying RNA through a biochemical process called ADP-ribosylation. The toxin, RhsP2, targets essential RNAs including transfer RNA (tRNA) and the RNA enzyme (ribozyme), ribonuclease P, leading to cell death by the inhibition of protein synthesis.

“Like humans, bacteria require properly functioning RNA to live,” said Whitney. “This research is significant because it shows that the toxin targets essential RNA molecules of other bacteria, effectively rendering them non-functional.”

Whitney’s team is interested in microbe-microbe interactions. The current study resulted from the team’s inquiry into a contact-dependent system that Gram-negative bacteria use to transport antibacterial proteins (toxins) into other bacterial cells to kill them. For Whitney, the key aspect of the discovery is not the toxin that kills bacteria, but how it accomplishes the feat.

“Pseudomonas aeruginosa is able to colonize so many diverse environments, including the human body. This capacity is due in large part to the various mechanisms it employs to outcompete and kill competing bacterial species and establish its own niche,” said Whitney. “Among these mechanisms is the Type Six Secretion System (T6SS), a membrane embedded ‘weapon’ that delivers protein toxins into nearby cells in a contact-dependent manner. We sought to define the toxin repertoire of P. aeruginosa and in doing so found that it delivers a swath of toxins that wreak havoc on competing bacteria. Among the most potent of these toxins was RhsP2, which kills bacteria by corrupting their essential RNA molecules.”

“It’s a total assault on the cell because of how many essential pathways depend on functional RNAs” said Nathan Bullen, a graduate student in McMaster’s department of biochemistry and biomedical sciences and first author of the study. “This toxin enters its target, hijacks an essential molecule needed for life, and then uses that molecule to disrupt normal processes.”

Using global sequencing and conventional immunoblotting approaches, Bullen zeroed in on RNA as the target of the toxin after testing other common molecular targets of toxins, such as proteins and DNA. Earlier studies have shown ART toxins conventionally act by modifying essential proteins, which results in the inactivation of cellular processes and pathogenesis. ART toxins can also inactivate antibiotics and DNA repair mechanisms.

The researchers analyzed crystal structures of RhsP2 as part of the study that revealed its resemblance to protein-targeting ARTs such as diphtheria toxin. However, RhsP2 modifies key (2’) hydroxyl groups of double-stranded RNA, enabling it to promiscuously modify a range of RNA targets, such as the pool of tRNAs and ribozymes, that eventually disrupt translation and tRNA processing, and result in cell death.

“We continue to learn more and more about the role noncoding RNAs play in almost all aspects of bacterial physiology,” said Whitney. “In this work, we report a bacterial toxin that specifically targets many of these RNAs, making it clear that these essential molecules could be exploited as targets for antimicrobial therapies.”

The post Discovery of Bacterial Toxin Could Lead to New Antibiotics appeared first on GEN - Genetic Engineering and Biotechnology News.