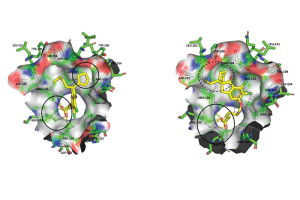 Researchers at Washington University School of Medicine in St. Louis have developed a new class of compounds that can improve multiple aspects of metabolic syndrome. The compounds act as modulators of a protein called SWELL1, and tests in mouse models of diabetes showed that the initial compound, designated SN-401, helped to treat diabetes by improving the ability of the pancreas to secrete insulin and boosting the ability of other tissues to utilize that insulin to more effectively remove sugar from the bloodstream.

Metabolic syndrome is an increasingly common group of conditions that often occur together, and includes type 2 diabetes (T2D), high cholesterol, fat build-up in the liver, and excess body fat, especially around the waist. This syndrome can lead to cardiovascular disease, the leading cause of death worldwide.

Type 2 diabetes mellitus is a metabolic disease characterized by hyperglycemia that is caused by reduced insulin sensitivity in target tissues and impaired insulin secretion from pancreatic β-cells, the authors explained. T2D accounts for 90–95% of all diabetes mellitus cases in the United States, affecting about 24 million people. “It is associated with increased risk of cardiovascular disease, renal disease, liver disease, cancer, and infection and a hazard ratio for all-cause mortality of 1.80 compared to patients without T2D,” they continued, citing figures indicating that in 2017, the direct medical costs of diabetes in the United States reached $37 billion.

“We have many treatments for diabetes, but even with those therapies, cardiovascular disease remains a leading cause of death among patients with type 2 diabetes,” said Sah. “There is a need for new treatments that work differently from the current standard-of-care therapies.”

The protein, SWELL1, or LRRC8a (leucine-rich repeat-containing 8a), which Sah and his colleagues studied is named because of its role in sensing the size or volume of cells. The gradual decline of this protein may have a central role in the development of diabetes and other aspects of metabolic syndrome. The new research revealed that SWELL1 also helps to control insulin secretion from the pancreas and improve insulin sensitivity, including in skeletal muscle and adipose tissue fat stores. Surprisingly, the studies indicated that SWELL1 does both of these seemingly independent tasks because the protein has a previously unknown double life. It acts as a signaling molecule, turning on cellular tasks that govern how well cells use insulin and also facilitates the pancreas’ secretion of insulin into the bloodstream. “In this study, we provide evidence that SWELL1-mediated currents and SWELL1 protein are reduced in murine and human adipocytes and pancreatic β-cells in the setting of T2D and hyperglycemia suggesting that dysfunctional SWELL1-mediated signaling could contribute to T2D pathogenesis by impairing insulin sensitivity and insulin secretion,” the investigators noted.

“This protein, SWELL1, has a sort of dual personality,” Sah said. As the authors noted, historically, the SWELL1-LRRC8 complex was first described as a membrane protein that participated in non-ion channel-mediated protein–protein signaling (non-conductive signaling), and was only some years later found to form an ion channel complex with ion conductive signaling properties.

“SWELL1 or LRRC8a encodes a transmembrane protein, first described in 2003, as the site of a balanced translocation in an immunodeficient child with agammaglobulinemia and absent B-cells,” they wrote. “ … it was not until 2014 that SWELL1/LRRC8a was discovered to also form an essential component of the volume-regulated anion channel (VRAC), forming hetero-hexamers with LRRC8b-e.”

For their reported studies, Sah and colleagues investigated a small molecule modulator SN-401, as a tool that binds to the SWELL1-LRRC8 complex. “The compound binds to SWELL1 in a manner that stabilizes the protein complex so as to enhance expression and signaling across multiple tissues, including adipose, skeletal muscle, liver, the inner lining of blood vessels, and pancreatic islet cells,” Sah said. “This restores both insulin sensitivity across tissue types and insulin secretion in the pancreas.”

Sah and his colleagues showed that the compound SN-401 improved multiple aspects of metabolic syndrome in two groups of mice that each developed diabetes from different causes, one because of a genetic predisposition and the other due to a high-fat diet. In addition to improving insulin sensitivity and secretion, treatment with the compound also improved blood sugar levels and reduced fat build-up in the liver. Most of the studies were conducted with an injected form of the compound, but the researchers showed evidence that it also could be effective if taken by mouth.

Their experiments further demonstrated that the compound does not have a big impact on blood sugar in healthy mice, which is important for its potential as a future possible therapy. Current medications for diabetes can result in blood sugar levels that are too low. “In vivo, SN-401 restores glycemic control, reduces hepatic steatosis/injury, improves insulin-sensitivity and insulin secretion in murine diabetes,” the investigators wrote. “Collectively, these data suggest that SN-401 mediated effects on systemic metabolism in vivo occur via SWELL1 modulation in multiple tissues, including adipose, skeletal muscle, liver, and pancreatic islets.” The evidence also suggested that the compound does not lower blood sugar in situations when it doesn’t need to.

In an effort to optimize the treatment, the researchers created a class of related molecules. “The current study provides an initial proof-of-concept for pharmacological induction of SWELL1 signaling using SWELL1 modulators (SN-40X) to treat metabolic diseases at multiple homeostatic nodes, including adipose, skeletal muscle, liver, and pancreatic β-cell, whereby SN-40X compounds function to restore both insulin sensitivity and insulin secretion,” they wrote. “These findings demonstrate that SWELL1 channel modulators improve SWELL1-dependent systemic metabolism in type 2 diabetes, representing a first-in-class therapeutic approach for diabetes and nonalcoholic fatty liver disease … Hence, SN-401 may represent a tool compound from which a novel drug class may be derived to treat T2D, NASH [nonalcoholic steatohepatitis], and other metabolic diseases.”