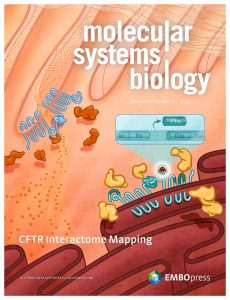 Using an updated version of a recently developed technology called MaMTH-HTS (Mammalian Membrane Two-Hybrid High-Throughput Screening) that allows the detection of membrane-associating factors directly in living human cells, scientists have identified hundreds of new proteins that could lead to a better understanding of the cellular effects of cystic fibrosis (CF) and help identify new drug targets for precision medicine treatments.

Igor Stagljar, PhD, professor in the Donnelly Centre for Cellular and Biomolecular Research at the University of Toronto, and a co-inventor on a patent for the MaMTH technology, is the senior author of the paper. “With a more comprehensive view of the CFTR protein interaction network, we can identify novel drug targets that should enable more patient-specific therapies,” Stagljar said

Mutations in the chloride and bicarbonate channel CFTR (Cystic Fibrosis Transmembrane Conductance Regulator), lead to the accumulation of excessive mucus in the lungs and other organs that is often fatal in CF—the most common lethal condition in Caucasians.

“CFTR is a channel with 12 transmembrane domains and its extremely difficult to study its interacting partners. We tested the CFTR in a new version of the MaMTH-HTS to identify all proteins that associate with CFTR,” said Staglijar. “We identified more than 400 proteins associated with either healthy or mutant CFTR, and have shown that some of them could predict the variability seen in patient symptoms and treatment responses.”

The updated MaMTH-HTS, is a high-throughput version of a technology that the Stagljar team had published in Nature Methods in 2014, and allows them to screen of many more membrane proteins than the parent version.

“The earlier design was array-based, and we could only screen about 200 proteins at a time,” said Stagljar. “With this new technology, we’ve introduced several changes that allow us to screen thousands of membrane proteins of interest simultaneously, in a pooled manner, in a very easy and convenient way.”

One of the CFTR associated proteins that the team has identified in this study is Fibrinogen-like 2 (FGL2), a protein believed to play a role in hepatitis, liver disease and immunity. To functionally validate this candidate, the researchers show knocking down FGL2 in in vitro 3D organoids derived from patient-derived gut tissues, increases the amount of fully glycosylated CFTR, indicating an improvement in CFTR processing.

“We think Fibrinogen-like 2 protein is a valuable drug target for cystic fibrosis, and we’re now working with our collaborators to validate other proteins that turned up in this study and in genome-wide association studies,” said Stagljar.

CF affects over 90,000 people worldwide and occurs when both copies of the gene are mutated (recessive inheritance). Despite tailored CF treatments for the nearly 2000 known CFTR mutations, patient responses vary widely even among patients who share the same mutation. Researchers have long suspected variations in treatment response hinge on genetic modifiers and environmental factors. The identification of CFTR interacting proteins in the current study will help pinpoint these modifiers.

“This study represents a breakthrough in proteomics and cystic fibrosis, but it would have been impossible without our many collaborators,” said Stagljar. “We developed the technology, but we’re not experts in cystic fibrosis, physiology and other fields, so we teamed up with the best and they made it happen—that’s how science works nowadays.”

In addition to FGL2, Stagljar’s team is working on other CFTR targets. Stagljar said, “We have several solute carrier (SLC) proteins which we are progressing [into clinical trials]. This work is being done in collaboration with clinicians, such as Tanja Gonska, Christine Bear, also Margarida Amaral in Portugal and also Lisa Strug at the Hospital for Sick Kids. We’re working very hard to understand the biological and clinical importance of several proteins that associate with CFTR.”

With a long-standing interest in cancer signaling, the Stagljar team is also focusing on the detection of protein interactions involved in cancer. The team is testing hundreds of proteins that are of pharmaceutical importance such as receptor tyrosine kinases, small GTPases, SLC proteins and ABC transporters.

In addition, the team is  making further improvements on the screening platform. Stagljar said, “In about a year we should have a better copy of MaMTH-HTS that gives us much less background and will allow us to do more screens per week, maybe thousands.”