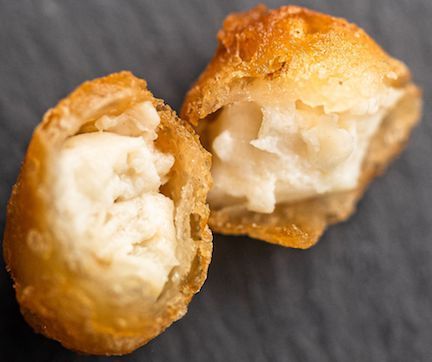 Today BlueNalu, a San Diego-based startup developing seafood from fish cells through a process called cellular aquaculture, announced that it has done a culinary demo of its cultured yellowtail amberjack.

In a press release the company called the demo a “milestone” to support its plans to introduce cell-based seafood to market within the next two years. BlueNalu CEO Lou Cooperhouse noted that the company has also internally tested mahi mahi and red snapper.

However, it seems that BlueNalu’s fish is unique in that it acts just like traditional fish in all cooking techniques, whether it’s served seared or steamed or raw. As Cooperhouse noted in the release, “we don’t believe that any other company worldwide has been able to demonstrate this level of product performance in a whole-muscle seafood product thus far.” In the tasting, the so-called “medallions” of yellowtail were prepared cooked in tacos and seafood bisque, as well as acid cured in a poké dish. Wild Type’s salmon, by contrast, can’t be cooked to high temperatures or else it falls apart.

BlueNalu’s next step is to scale, scale, scale. They’ll have to move pretty quickly to meet their incredibly ambitious plans that include a goal to break ground on a facility which will produce 18 million pounds of cell-based seafood within the next five years.

While a successful culinary demo doesn’t necessarily mean that BlueNalu will be able to achieve that goal in that timeline, it’s certainly a promising first step.