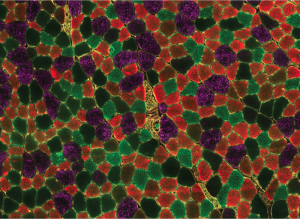 Researchers headed by a team at the École Polytechnique fédérale de Lausanne (EPFL) School of Life Sciences have made the first connection between muscular dystrophy (MD) and sphingolipids, a group of bioactive lipids. The team’s analysis of a publicly available dataset found an upregulation of sphingolipid biosynthetic enzymes in muscle biopsies from muscular dystrophy patients. Through subsequent in vivo experiments, the team then showed that pharmacological inhibition of sphingolipid synthesis in a mouse model of Duchenne muscular dystrophy (DMD) ameliorated loss of muscle function and improved other characteristic features of the disease.

“Our study presents a strong case to embark on developing novel inhibitors of the sphingolipid synthesis pathway that can be administered either alone or in combination with existing treatments,” reported study lead Johan Auxerx, and colleagues in their published paper in Science Advances, which is titled, “Inhibition of sphingolipid de novo synthesis counteracts muscular dystrophy.” In the paper, the team concluded, “The multifaceted benefits achieved by correcting aberrant sphingolipid metabolism could delay the onset of symptoms, slow the progression of disease, and ultimately counteract the loss of independence associated with muscular dystrophies.”

Muscular dystrophy is an umbrella term for diseases where gene mutations result in progressive weakness and breakdown of skeletal muscles. About half of all muscular dystrophy cases involve DMD, which is caused by one of potentially thousands of mutations in the gene that codes for dystrophin, a protein that supports muscle structure by anchoring the cytoskeleton of muscle cells with their cytoplasm, the sarcolemma. Dystrophin mutations affect various biological pathways causing the hallmark symptoms of DMD: compromised cells membrane integrity, aberrant calcium homeostasis, chronic inflammation, fibrosis, and impaired tissue remodeling.

Affecting about 1 in 3,500 newborn boys, DMD can lead to premature death due to cardiac or respiratory failure. There is currently no cure for DMD, the authors pointed out. “Despite recent advances in CRISPR-Cas9–mediated gene editing, the high allelic heterogeneity of the disease and the safety concerns of recent clinical trials present challenges to gene therapy, suggesting that pharmacological approaches are required to complement these therapies and to help manage patients with mutations unsuitable for gene-editing technologies.”

Glucocorticoids are currently the only pharmacological treatment for DMD in guidelines, but their efficacy is limited, and they have significant side effects, the authors continued. “The high prevalence and the debilitating nature of the disease call for urgent efforts to develop new disease-modifying treatment strategies for DMD … Optimally, treatment strategies would not only target one but several pathways involved in DMD pathogenesis.”

Discovered in 1870 and named after the Sphinx, sphingolipids are a group of bioactive lipids thought to be involved in cell signaling, and, surprisingly, many of the symptoms present in DMD. Therefore, the researchers asked whether the synthesis of sphingolipids can be altered in DMD—and if so, if they can be causally involved in the pathogenesis of DMD. “While intensive research efforts have focused on exploring the role of sphingolipid depletion in treating metabolic disorders, the role of sphingolipid metabolism in muscular dystrophy still remains unproven,” they noted. “DMD shares many biological pathways with metabolic disorders, calling for testing whether inhibition of sphingolipid de novo synthesis pathway, having diverse effects in cellular physiology could restore muscle function in DMD.”

The team’s analysis of publicly available data on tissue biopsies from patients with different muscular dystrophies found what they called “an almost universal up-regulation of sphingolipid biosynthetic enzymes …” which indicated the involvement of the sphingolipid de novo synthesis pathway in human muscular dystrophies. The team then turned to the mdx mouse model of DMD, which carries a point mutation in the Dmd gene, similar to human DMD patients. They found that when compared with normal, control mice, the mdx mice also exhibited increased levels of enzymes of the sphingolipid de novo synthesis pathway, and increased levels of intermediates of this pathway in the animals’ skeletal muscle. This was a key clue that sphingolipid metabolism is abnormally increased in the context of muscular dystrophy. Interestingly, it also appeared that muscle sphingolipid levels correlated with disease severity, “… in line with transcript abundance human muscle biopsies,” they wrote.

The results confirmed that inhibiting synthesis of sphingolipids counteracted the DMD-related loss of muscle function in the treated mice. Digging deeper, the researchers also found that myriocin stabilized the turnover of muscular calcium, and reversed fibrosis in the diaphragm and in heart muscle. They stated, “Myriocin, an inhibitor of SPT, strongly reduced the abundance of sphingolipid intermediates and reversed multiple DMD-associated, fundamental pathogenetic pathways, including aberrant Ca2+ homeostasis, compromised sarcolemmal membrane integrity, satellite cell imbalance, chronic inflammation, and fibrosis … The observation that by inhibiting the sphingolipid de novo synthesis pathway, we were able to reverse not only one but several pathophysiological pathways involved in DMD points to the high therapeutic potential of targeting sphingolipid synthesis pathway.”