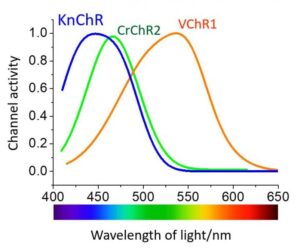 Channels with walls of protein through which charged atoms cruise across biological barriers are called ion channels. Scientists have discovered a new ion channel that can be switched on and off by indigo blue light, the shortest wavelength of light that can be used to operate any ion channel discovered to date.

Channelrhodopsins (ChRs) are ion channels found in green algae that allow the selective passage of charged atoms (ions) and can be opened or closed directly by shining light of specific wavelengths on them. The discovery of ChRs has opened a new field of research in neuroscience, optogenetics—the application of light to modulate cellular and genetic functions—that aspires to cure maladies from blindness to Alzheimer’s through light therapy.

A group of scientists from the Nagoya Institute of Technology, Japan, and Jawaharlal Nehru University, India, report the characterization of the new ChR, which they name KnChR, from a species of land alga called Klebsormidium nitens, in an article in Nature’s Communications Biology, titled “Specific residues in the cytoplasmic domain modulate photocurrent kinetics of channelrhodopsin from Klebsormidium nitens.”

“We chose this alga, because it is known to be responsive to light, but its photoreceptor domain has not been established,” says Hideki Kandori, PhD, professor at the Department of Life Science and Applied Chemistry, Nagoya Institute of Technology, Japan.

The researchers performed extensive genetic and electrophysiological experiments to investigate the properties of KnChR. They report this novel ChR is made up of seven membrane-spanning domains that form the pore of the channel and a carboxyl terminal binding domain that determines the rate at which the channel closes. Trimming the carboxyl terminal binding domain to various lengths prolongs the channel’s openness by more than 10-fold, the authors report.

The authors report that KnChR exhibits maximal sensitivity at 430 nm and 460 nm, making it the “bluest” ChR discovered to date. This offers a novel prototype for studying the molecular mechanism of color tuning in ChRs, the authors note.

The researchers are confident KnChR will prove helpful in biological systems requiring specific excitation parameters. KnChR can be applied in the targeted manipulation of an organism’s biological functions, such as the manipulation of neuronal and muscle cell activities. Real-world applications of this illuminating technology could bring us a step closer to the discovery of non-invasive therapies for blindness and Alzheimer’s disease.