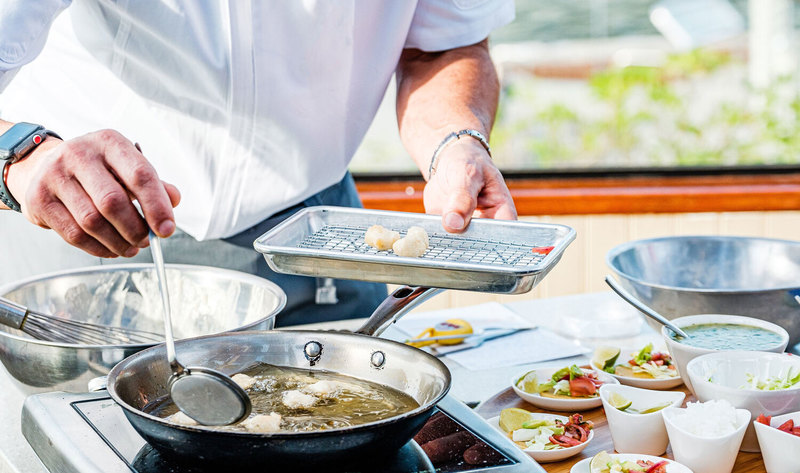 San Diego-based food technology startup BlueNalu unveiled its slaughter-free yellowtail amberjack filets, which it made from a small amount of fish cells, at a private tasting event.

This week, San Diego-based startup BlueNalu cooked up the world’s first piece of yellowtail amberjack that was made without slaughtering a fish at a private tasting event it held for investors and global partners. The company demonstrated the culinary versatility of the fish—which it made through cellular aquaculture using a few fish cells and growing them into slaughter-free meat—by serving it in various ways (raw, acidified, and cooked). “With our recent product demonstration, BlueNalu has accomplished a major milestone,” BlueNalu President and CEO Lou Cooperhouse said. “Our team has successfully produced whole-muscle portions of yellowtail fish fillet, derived directly from fish cells, in which our product performs the same way as a conventional fish fillet in all cooking applications.” BlueNalu Corporate Chef Gerard Viverito treated guests to fish tacos, seafood bisque, poke, and kimchi dishes to demonstrate how the fish can be applied to common restaurant menu items in regions such as Asia, Europe, and North America. “As a chef, I’m extremely excited about cooking with a whole muscle, cell-based seafood product, as this represents sustainability in a whole new way,” Viverito said. “I feel great about cooking with seafood that I know supports ocean health and species biodiversity. In addition, I don’t have to worry about bones, fish scales, filleting, or having to throw away any unused fish parts.” In addition to yellowtail, BlueNalu has successfully created other finfish products, including mahi mahi and red snapper. The company—which formed its research and development team only 18 months ago—plans to launch its products in a test market in the next 18 to 24 months. In August, BlueNalu outlined its plans vision for a lab-grown seafood production facility, which, at scale, would produce 18 million pounds of seafood without the need to slaughter marine animals.

The post A California Company Just Made the World’s First Yellowtail Tuna Without Killing a Fish appeared first on Clean Meat News Australia.